The first kiss, the first dance, the vows and beyond, here, top videographers give their best advice on the wedding moments not to miss.

The one of you both getting ready – apart.

It’s common for many couples to have the pre-wedding jitters the evening before their wedding. Even if they are more than 100 percent cemented in their decision to walk down the aisle, the pressure and excitement is a lot to process. That’s why the morning-of wedding moments are that much more genuine—featuring your nervousness and your bright smiles with your friends and family, as you both get ready separately.

The one of the first look.

While some traditional standards dictate the descent down the middle of the pews to be the very first time the happy couple spot one another, more twosomes are opting for the seclusion of a first look. By definition, this gives the spouses-to-be privacy to truly react to witnessing one another for the first time on their wedding day.

The altar reaction, too.

Generally, the ceremony is the hardest part of the wedding to film. If possible, bring along an assistant who can record from a second angle. Views of both the groom’s face and the bride walking down the aisle, for example, make for interesting, poignant footage.

Other parts of the ceremony to shoot include: 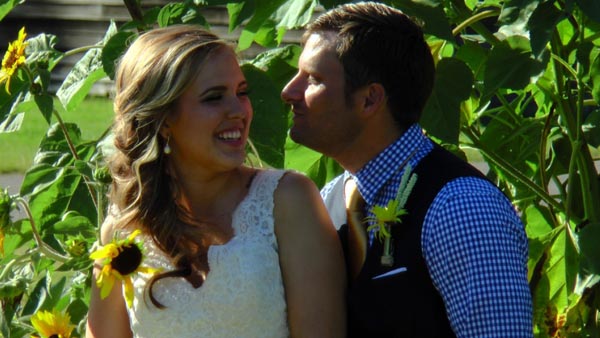 Don’t Include: A Photomontage

Don’t get us wrong, it’s always fun to look at baby pictures and honeymoon snapshots. But you don’t need a reel of both to start off and end your wedding video. Save the childhood photomontage for your rehearsal dinner. If you want to share it, burn copies of the DVD, or download the file onto your computer and send around the link. Your friends will lose attention after 20 minutes—tops—and you don’t want to waste five of those watching still photos of you two morphing from infants to awkward adolescents to newlyweds. Get straight to the action. If you’re investing in a videographer to cover your entire wedding, you’ll have plenty of footage to condense into a 20- to 30-minute film, so devote your videographer’s time (and your money) toward a skillfully edited video your friends and family won’t mind watching (and you’ll have time to watch again and again).

Do Include: A Digital File

While DVDs are still a popular method for delivering wedding videos, most videographers are now offering digital movie files in HD on thumb drives as well. (In this age of Netflix and On Demand, some couples may not own a DVD player.) A thumb drive not only allows you to stream your wedding video to your TV via Apple TV or a similar device (several TVs now come with built-in USB ports), you can also easily share the file digitally with friends and family, both near and far.

Do Include: The Ceremony

You’ll definitely want footage of the entire ceremony, from the start of the processional to your final exit, and especially the important words (and tears and laughs) you share in between. If you’re getting married in a house of worship, make sure they allow filming inside (most do). So don’t skimp on ceremony coverage in order to get more reception coverage out of your four-hour video package. In fact, the ceremony is a good reason to splurge on a second shooter. Also, build in time for your videographer to capture the guests arriving before the ceremony—it’s one of those moments you’ll miss on your wedding day that will be fun to watch afterward.

Before the wedding ceremony

The time for the party has finally arrived! Your videographer will mostly be filming the reception events as they happen, along with a little dancing. Again, if you have a second videographer they will be able to get more close-ups and details of the event.

Make sure to utilize your videographer to the fullest. Instead of having them stand there filming dancing from a tri-pod after the main events, make sure they get the camera off the tri-pod and travel around the room a little bit. Have them get right in the middle of the dancing, talking to guests, and getting an update from you and your new spouse on how the night is going.

Expect the footage to be loud in the background, but the point is to capture the fun and festive atmosphere, not to get perfect audio.

Any other cool snacks you have set up

Hopefully this wedding video shot list has given you some great ideas to ask of your wedding videographer. Like I said in the intro, some shots are pretty straight-forward while others you may not have thought of.