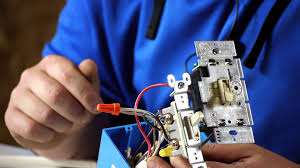 How to Replace a Single-Pole Light Switch

If a switch doesn’t work, first make sure the problem is with the switch and not the light or device it’s supposed to power. Put a new bulb into the light fixture or plug a working lamp or other appliance into the switch-controlled receptacle to make sure the switch is faulty.

When you replace a switch, make sure you check the amp and voltage ratings on the back of the old switch. The new switch should have the same ratings. If you have aluminum wiring (the metal part of the wires looks silvery), be sure to get a replacement switch marked “CO/ALR.” Unmarked or CU/AL switches should be replaced with CO/ALR switches.

Here is how to replace or install an old single-pole light switch with new one:

Place one probe on the bare ground wire inside the box and touch the other probe on each of the wired screw terminals of the switch or the bare end of the black wire that will carry electricity to the switch. No voltage should register.

If the wires are connected to terminal screws, turn the screws counterclockwise to loosen them and unhook the wires. If the wires are pushed into terminal holes in the back of the switch, push a very small flat-bladed screwdriver into the slot next to the screw connection holes to release the wires.

Note: If the switch has its own grounding wire, twist the bare end together with the circuit’s grounding wire, using lineman pliers, and secure it with a copper compression sleeve or wire nut. Note: If you are using a metal box, include a grounding wire “jumper” from the ground wire connections to the box.

It does not matter which wire goes to which terminal. If the switch only has push-in terminal holes in the back, make sure that 1/2 inch of insulation is stripped from the end of each circuit wire, straighten each tip with lineman’s pliers, and push the wires into the terminal holes (again, note the brass and silver sides of the switch). Wiggle all the wire connections to make sure they are secure.

Note: If the new switch has short wires coming out of its body, use lineman’s pliers to twist together the bare end of the green wire clockwise with the circuit’s green or bare ground wire, and then secure the connection with a wire nut.

Then join the bare ends of the switch’s wires to the circuit wires, twisting clockwise, and secure them with wire nuts. Wiggle the wires to make sure the connections are secure.

Then turn the circuit back on. If the light still doesn’t work, the problem is in the wiring or the light fixture. See Light Fixtures Troubleshooting & Repairs.

Caution: If you have aluminum wiring, call in a licensed pro who’s certified to work with it. This wiring is dull gray, not the dull orange that’s characteristic of copper.

Have the necessary tools for this DIY wiring a three way switch project lined up before you start – you’ll save time and frustration.

Avoid last-minute shopping trips by having all your materials ready ahead of time. Here’s a list. 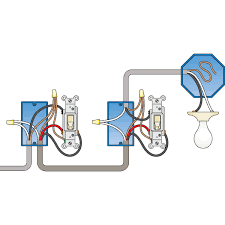 Does it matter which black wire goes where when changing a light switch?

Next, never do any wiring unless you completely understand the task at hand.If you have two black wires in the box one may be bringing power in, and the other leading it out. If that is all that is there then the switch can go between them in either order.

If you have anything else stop and get further help where you can post pictures and a better description of this spot. Properly you should have a black always hot wire bringing power in and a red wire going to the light. Red means the line may be switched.

Sometimes electricians go cheap and use black instead of red. 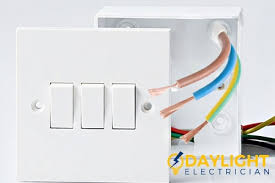 For a normal light switch, the ground is a safety feature, not necessary for operation. You can leave that screw unconnected if you don’t have a ground wire, or if you have the wire but no screw on the switch, you can ground the switch another way.

The purpose of a ground wire on a light switch

The green-colored screw in the upper left is for the ground wire. I don’t recommend it, but you can wire a light switch without ground if you have to.

Some occupancy-sensing automatic light switches need a ground wire, but traditional toggle-type switches do not. They can do their job just fine with or without ground.

With an ordinary toggle switch like the ones on the right, the ground wire is strictly a safety feature. If you flip a switch with wet hands, having a ground connection reduces the chance of you shocking yourself. It doesn’t guarantee it, but it does reduce the chances. That’s why a light switch without ground isn’t the best idea, but it can still work.

Going without a ground wire

If the light switch has a screw for a bare ground wire but your electrical box doesn’t have one, you’re OK just leaving that screw empty and connecting your other wires to the hot screws.

In many cases, especially in older houses with metal boxes, the metal box may be grounded even if you don’t have a ground wire. When you screw the light switch in, it will make contact with the box, and as long as the box is grounded, it will pick up ground that way. If the box isn’t grounded, the switch will still work. Just be sure to remember your mother telling you to dry your hands before turning off the lights.

If you can’t, connect the ground wire to the electrical box instead, assuming it’s a metal electrical box. If you can’t do that, or if your box is plastic, wrap one turn of the ground wire around one of the screws that secures the switch to the box. As long as the switch’s bare metal frame makes metal-to-metal contact with ground somehow, your light switch is grounded for safety. 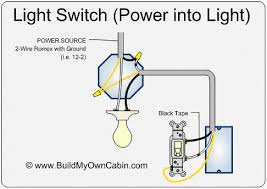 All About Light Switch Wiring

Learn how to fix a faulty light switch with our guide to power-through and end-line switches.

Being a smart homeowner means knowing what is going on in your home and how it works—including the electrical elements. Behind your walls, there are wires running up and down that make it possible for a light switch on the first floor to turn on a tall chandelier hanging from the ceiling. While it might seem like magic, it’s just a matter of understanding how your light switch wiring works. Check out our comprehensive guide to learn the ins and outs of light switch wiring, including information on power-through and endline switches.

How Does Switch Wiring Work?

Because the white wire from the switch to the light is now a hot wire, it must be marked to show it is hot. Wrap a piece of black electrician’s tape around it at both ends or color the end black with a marker to show that it carries power.

If power goes to the fixture first and then to the switch, you have “end-line” wiring. Only one cable enters the switch box, coming from the fixture. Here the white wire to the switch is marked black to indicate that it is hot. (Ground wires are not shown.)